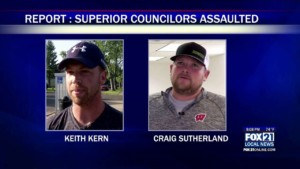 Those councilors are Keith Kern and Craig Sutherland.

The police report says two male suspects were causing a disturbance at Jimmy’s Saloon, which Kern owns, in Billings Park around 1 a.m. Wednesday.

The report states the suspects were badgering customers who work in non-union construction jobs.

The men were eventually kicked out of the bar, and during that process Sutherland was pushed through a wooden fence outside, according to the police report, and Kern was punched in the face.

The suspects were eventually arrested.

If and when formal charges are filed, names of the suspects will be released.