SUPERIOR, Wis.- Columbus Day has been recognized as a national holiday for more than 80 years. But many places around the country are flipping the script and celebrating today as Indigenous People’s Day.

Here in Minnesota there are 13 recognized Native American tribes, and in Wisconsin, 11. They, like their fellow indigenous people across the country, have occupied this land far before Columbus sailed the ocean blue in 1492.

So today in the Northland, Indigenous People are being recognized for their struggles, and contributions to the region. And they’re being celebrated in a big way at the University of Wisconsin-Superior.

A 30-foot Ojibwe medicine wheel was officially unveiled Monday, called “Maawanji’idiwin,” or the place where we come together.

The wheel is divided into four quadrants: red, yellow, black and white. The four colors represent the four seasons, four directions, and four races of the world. 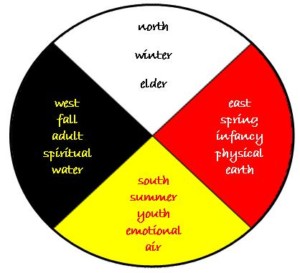 It’s customary to enter the wheel through the red “east door,” and walk clockwise through each color.

In the middle of UWS’s wheel lies a blue circle, symbolizing water, and community. The green bars that sprout from it and divide the circle into quadrants, connect it all.

The “medicine” of the medicine wheel actually lies beneath the concrete, where herbs were laid prior to construction.

Assistant Director of Diversity, Equity, and Inclusion Kat Werchouski, also indigenous, said the medicine wheel represents the balance and harmony of Earth, and trouble comes when we fall out of that balance.

The school says it will serve as a lecture spot, a reflection spot, and a spot where indigenous students can feel at home.

“They can see themselves represented in spaces that are, I would say, predominantly Caucasian or white,” Werchouski said. “To me this says that: this is your campus, this is your homeland, this is Ojibwe land.”

UWS officially proclaimed Monday as Indigenous People’s Day, for the first time in the institution’s history. A proclamation was also read by Mayor Jim Paine of the City of Superior, and a state citation congratulating UWS from Representative Nick Milroy and Senator Janet Bewley.

Also announced was a new scholarship for Indigenous students called the Maawanji’idwin Honors Scholarship. It will be available for Indigenous undergraduate and graduate students, hopefully next spring. The school said they have begun accepting donations now.

Following the remarks, the ribbon was cut, ushering in a new era of Native American equity at UWS.

The audience was then invited to a free performance by the Woodland Sky Native American Dance Company in the Thorpe Langley Auditorium.

The theater darkened, only colored light shining from the stage. Brightly colored tribal clothes flashed, as the eagle feathers adorning them motioned, guiding the viewer through the dance like an eagle to its young. The flute player’s melodies wandering through the air with the smoke, finding their way to content ears and hearts.