Issue with Comments from Meetings Now Goes to City Council

DULUTH, Minn.- “…we stop being oppositional and look for ways to make our community safe.”

The tired plea from one concerned citizen at a third community meeting discussing whether the Duluth Police Department should purchase new riot gear.

The Citizens Review Board held its final community meeting about the proposed purchase of riot gear.

The feedback along the way will now be handed over to the Duluth City Council before a vote on Monday.

The final hoorah of community feedback for this issue seemed to sound a bit like a broken record. The community turn out was lower, but the concerns still strong.

The Citizens Review Board held this meeting to present the compiled list of comments made in person at the last two meetings, and those made online.

For the last time, they invited any members of the community to share their thoughts, before the decision to purchase riot gear–also known as protective gear–rests in the hands of the council once again come Monday.

“From what Chief Tusken has stated, I’m, y’know, looking at the pros and cons,” said NAACP member Janet Kennedy.

“If you look at the need and the fact that he has even stated that it may sit on the shelf—I do struggle with spending that much money when we have other needs in this community.”

Duluth police chief Mike Tusken has said every major police department in the state has protective gear, except for Duluth.

He says the gear, which would cost roughly $83,000 would only be used in very rare occasions for large–scale threats to people or property. 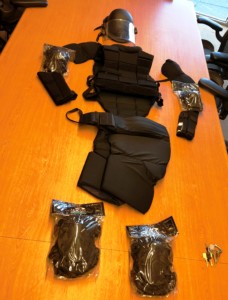 Yet some say it’s militarizing our police force.

The review board says that while it’s a polarizing issue, reaching common ground is their priority.

“I know everybody’s not going to be happy,” said Archie Davis, Chair of the CRB. “But getting a good solid policy in place that works, and everyone can agree on.

“So as long as we can agree to disagree to agree on something, that works for me.”

The next step for this issue is for city council to vote yes or no on it, before any policy can begin drafting.

That is, if the council doesn’t decide to table this again, for a third time. Prolonging any resolution even further.