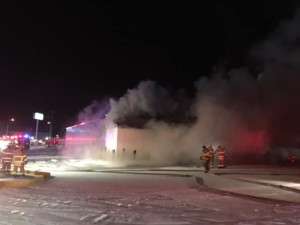 COOK, Minn.  – Multiple fire departments responded to a fire at the Zup’s Food Market in Cook Monday around 8:30 p.m.

Smoke could be seen pouring from the family owned business on Highway 53 in a video posted on Facebook by the Northland FireWire.  At one point, large flames were also seen shooting out of the building.

There have been no reported injuries to citizens or first responders at this time.

Authorities say the business is believed to be a total loss.

It was in 2011 when the Zup’s in Babbitt caught on fire and burned to the ground.  The store there reopened in 2012.

One of the store owners, Jim Zupancich, told Fox21 Wednesday morning, “We are 99.9% sure we are going to reopen.”