PJ's Rescue is a Non-Profit Organization Serving the Northland; The Group Works to Bring Dogs From Texas to Minnesota

Pacino was found wandering the streets of mesquite, Texas and was picked up by animal control.

His conditions upon intake at the shelter could only be speculated that he was used as a bait dog.

All of his teeth appear to have been intentionally filed down and he had abscesses on his ears and face.

He was also severely emaciated, as well as tested positive for heart-worms.

Due to the traumatic experiences that bait dogs are sir-combed to, PJ’s Rescue brought in a professional behaviorist to evaluate Pacino.

She was able to give the best approach to take with his training.

He begins his board and train this week with a well known trainer who is familiar with dogs with behavior issues.

Pacino deserves this chance to live a life of love and happiness.

Despite is awful hand that life has dealt to him, he remains a happy boy that loves to have human companionship. 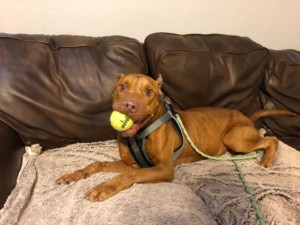 Teddy is a two year old male who was hit by a car.

He was rescued from the euthanasia code red list and rushed to PJ’s Rescue partner vet, Vickery Place Animal Hospital in Dallas, Texas.

He was operated on by the vets at Vickery where they were able to safely repair his intestinal wall but also found a seroma in his pelvic cavity.

He had a drain placed but due to another seroma forming had to have an additional drain and Foley catheter placed.

He has remained hospitalized for almost two weeks and will be on strict crate test for minimally two months, utilizing an orthopedic lift to assist in bathroom outings to allow his fractures to heal as best as possible.

If they do not heal naturally he will require additional orthopedic surgery.

All through this he has remained the sweetest and happiest dog.

He is always smiling, giving kisses and tail wags.

He is a staff favorite at the vet and will cuddle in your lap at any given moment.

For all he’s been through he is not only resilient and tough but so deserving of care and a forever home once medical able. 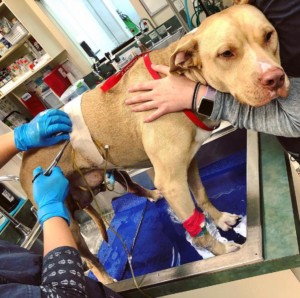