VIRGINIA, Minn.- The Virginia Police Department officer who fired his weapon during a fatal officer-involved shooting incident on Tuesday evening has been identified.

Officer Nick Grivna has been with the Virginia Police Department for nearly five years. Officer Grivna is on standard administrative leave. 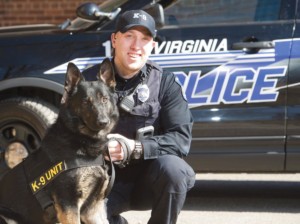 In addition, the Midwest Medical Examiner’s Office has identified the deceased as J Scot Alan Widmark, 41, of Virginia. Widmark died of a gunshot wound. The Bureau of Criminal Apprehension is investigating the officer-involved shooting at the request of the Virginia Police Department.

Yesterday, shortly before 5 p.m., officers responded to a 911 call from a woman who reported that a man now identified as Widmark approached her vehicle stopped on the 300 block of Second Street South in Virginia and demanded that she get out. Widmark allegedly entered the vehicle but then got out and grabbed a man standing on the sidewalk.

Law enforcement from the Virginia Police Department and the St. Louis County Sheriff’s Office arrived on the scene shortly after 5 p.m. and encountered Widmark still allegedly holding the man. At one point Officer Grivna discharged his weapon, striking Widmark. Widmark was taken by ambulance to Essentia Health-Virginia Hospital where he was pronounced deceased.

No one else was injured during the incident. BCA crime scene personnel recovered a knife at the scene where the shooting occurred.

Officers were not wearing body cameras. BCA investigators will determine whether squad cameras captured the incident.

The Virginia Police Department does have body cameras which arrived there two months ago, but Virginia Mayor Larry Cuffe told Fox 21 they are still working on some IT issues with them and they won’t be implemented until January.

The BCA’s investigation into the officer-involved shooting is active and ongoing. When the investigation is complete, the BCA will turn its findings over without recommendation to the St. Louis County Attorney’s Office for review.