New Details on Puppies Believed To Be Abandoned 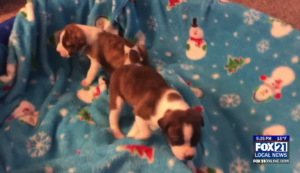 CLOQUET, Minn.- Some new information  about what Cloquet Police originally believed was two puppies found abandoned in a box at a Scanlon Park.

Authorities are now saying they do not think that’s what actually happened.

After further information, investigators say a few juveniles either purchased or received the four week old puppies and then made up a story about finding them in the park.

The apparently believed telling their parents they found them would increase their chances of keeping the dogs.

Eventually, the dogs were handed over to a woman who fosters animals.

The original seller, whose children are friends with the juveniles involved, says she found out about the puppies on the news and the Cloquet Police Department Facebook page.

She believed they were going to a good home when she sold them to the juveniles.

The seller also says she is speaking out because she wants everyone to know she genuinely wanted what was best for the puppies.

The woman fostering the puppies says she agreed to take them after hearing about their story on social media.

The puppies will remain in her care Until they find a good home.