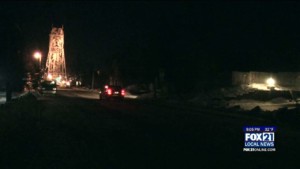 DULUTH, Minn. – A 70-year-old Park Point man is the victim of an assault after his home was burglarized while he was inside, according to the Duluth Police Department.

Police Information Officer Ingrid Hornibrook said late Thursday that another home nearby was also burglarized, along with three other homes that reported “damage to property.”  FOX 21 earlier reported three burglaries on Park Point, which was reported in the initial press release sent out by police to the media.

The incidents were reported between 5:51 p.m. and 7:08 p.m. Wednesday, Jan. 2. between the Lift Bridge and the 12th Street Beach by the so-called s-curve on Park Point, according to Hornibrook who first reported the incidents to have happened between 8 p.m. and 8:30 p.m.

The 70-year-old victim, whose name was not released Thursday, was taken to the hospital for treatment.   Hornibrook could not provide a condition report on the victim as of Thursday night and said that he was last reported in the hospital Thursday morning.

It is not known if the burglaries and “damage to property” incidents are related.

No suspects have been arrested and Hornibrook did not provide any descriptions of the person or people involved.

Level 3 Predatory Offender to be Released in Duluth