The First Meteor Shower of the Year Peaks Tonight

The Quadrantid Meteor Shower Will Be Visible By The Northland Overnight

DULUTH, Minn. — The Quadrantid meteor shower peaks tonight, one of the best annual shows in the night sky, according to NASA.

A moonless night should help our chances to see it between midnight and dawn, but location is also a factor with this one-night-only meteor shower peak. Those in the Northern Hemisphere, especially Europe and the surrounding areas, will have the best chance of observation.
Mid- and far-north latitudes, like the Northland, will have the best chance to see the peak, which lasts only a few hours.
Expect to see about 80 meteors per hour, but there could be as many as 200. The Quadrantids are known for bright, colorful fireball meteors because of the large particles of an asteroid interacting with our atmosphere.
If the meteor shower’s name sounds odd, it’s probably because it doesn’t sound like it’s related to a constellation, like other meteor showers. That’s because the Quadrantids’ namesake constellation no longer exists — at least, not as a recognized constellation.
The constellation Quadrans Muralis, first observed and noted in 1795 between Bootes and Draco, was not included in the International Astronomical Union’s list of modern constellations. 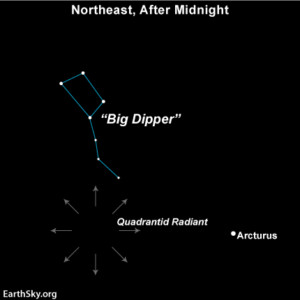 The meteor shower radiates between the Big Dipper and Bootes.
Like the Geminid meteor shower, the Quadrantid comes from a mysterious asteroid or “rock comet,” rather than an icy comet, which is unusual. This particular asteroid is 2003 EH1, which takes 5.52 years to orbit the sun once.
The shower’s short peak is because only a small stream of particles interacts with our atmosphere, and the stream occurs at a perpendicular angle. Each year, Earth passes through this debris trail for a short time.
If you live in an urban area, you may want to drive to a place that isn’t littered with city lights that will obstruct your view. If you’re able to find an area unaffected by light pollution, meteors could be visible every couple of minutes from late evening until dawn.
Find an open area with a wide view of the sky, and don’t forget to bundle up. Make sure you have a chair or blanket so you can look straight up. And give your eyes about 20 to 30 minutes to adjust to the darkness — without looking at your phone — so meteors are easier to spot.
On January 5 and 6, depending on where you live, a partial solar eclipse will be visible in China, in North and South Korea, in Japan, in Russia, and over the North Pacific Ocean and the Aleutian Islands. Find out what time to see it on Time and Date.
Between January 20 and 21, a rare super blood moon total lunar eclipse will be visible in North and South America, western areas in Europe and Africa, and a partial lunar eclipse will be visible in central and eastern Africa, Europe and Asia.
Categories: News, News – Latest News, Weather in the News
Tags: Meteor Shower