Family Of Larry Watczak, 70, Says Police Are Downplaying The Crime to the Public

DULUTH, Minn. – The Park Point resident who was violently attacked during a burglary in his home Jan. 2 is 70-year-old Larry Watczak, according to his son Erik Watczak. This comes as police announced an arrest Sunday night of a 30-year-old male suspect.

Erik says his father remained in the hospitalized Sunday night in critical condition and has not come out of a coma.

Meanwhile, as the family prays for a full recovery, they say they are frustrated the Duluth Police Department has not told the public just how violent the crime was. FOX 21’s Dan Hanger reports.

“It’s really hard to see that this is where he was just laying around sleeping and doing nothing wrong and somebody had to come in and do something like this — breaks my heart,” Erik said.

According to Erik, his father was hit over the head with a blunt instrument around 5:50 p.m. while taking his evening nap in his home on the 800-block of Lake Avenue on Park Point.

The door the intruder or intruders entered was unlocked at the time, according to Erik, which is something that isn’t uncommon for longtime residents on Park Point who are used to that type of life from decades past. 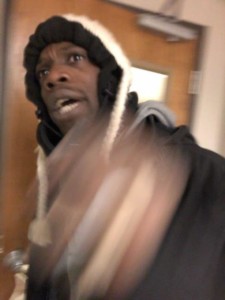 “He’s been here 40 years and I have a hard time trying to get him off. I’ve been trying for a while, but there’s something about the Point that he just loves,” Erik explained.

Erik said Larry was able to charge up an old phone to call 911 for help before the bleeding and swelling would later send him into a coma at a hospital in Duluth.

Authorities released a picture Sunday of a black male who was later arrested and believed to be responsible for what police have been calling a “burglary” and “assault” – terminology the Watczak family does not agree with.

“Very frustrated,” Erik said. “This is a home invasion — plain and simple. It should have been out immediately. I fully believe that [city officials] are just brushing it over so we don’t have problems with our tourist area.”

Kolton Watczak, 17, is Larry’s grandson and says “hitting someone with a blunt force object and having that person go into emergency brain surgery is a little bit worse than an assault.”

“It just really upsets me that someone could have done something this bad to him, because he’s not that type of person who deserves this,” Kolton said.

Kolton, who every Wednesday in the summer heads out to lunch with his grandfather in one of his classic cars, said the crime has changed him and he has a message for the person or people who did it.

“They’re a sick, sick person.  And that they better hope we don’t fine them,” Kolton said.

And while the community comes together with the hope of a full recovery for Larry, the boldness of the crime and the theft of just a flip phone, wallet and tablet is beyond words for his son.

“Was less than 150 dollars-worth of value for what they did to him, and that’s what disgusts me — a lot,” Erik said.

He also posted on his Facebook Saturday to call the crime “tragic” and “rare” for Duluth.

And as for what the family believes is a lack of transparency to the public on the severity of the crime, Tusken writes in that post:

“As an open investigation, the details we can release at this time are limited. When we have further information we can release or believe the public can help us solve this case, we will be sure to request the help of our partners in the media and use social media to get the message out.”

The burglary and assault to Larry Watczak was one of two burglaries on Park Point Jan. 2, which included three “damage to property” reports between 5:50 p.m. and roughly 7 p.m.  It is not known if the suspect arrested Sunday night is also a suspect in those incidents.

And while the chief says violent crime is rare in Duluth, one life-long resident of Park Point told FOX 21 the attack of Jerry Watczak is a level of violence he’s never seen in his time on Park Point.

Vietnam veteran Tom Mackay, 74, said since the quiet years of the 50s, 60s, and 70s, he’s upgraded his home security and motion detector lighting throughout his property.

“Yeah, it’s a one-way street to get out of her. But the problem is that every time it’s up, we are always told that either the video cameras aren’t on or the footage is too grainy to find anything on it,” Mackay said.

Mackay is hoping the city or Homeland Security will invest in HD cameras on the Lift Bridge. Or he’s even suggesting a GoFundMe campaign to help get it done.

The Lift Bridge’s supervisor, Dave Campbell, told FOX 21 Sunday the cameras on the bridge are roughly 10 years old and were not designed to be used for facial recognition.

But Campbell said the current cameras do their intended job to view vehicles and pedestrians for lowering and raising the bridge.

Great Start to the Season for Barnum Volleyball Team

Explore the Sights, Sounds of Tettegouche State Park This Fall