SUPERIOR, Wis. – In a two-part special report, we take you inside the Douglas and St. Louis county jails. Corrections officers talk about the dangers faced inside and outside the jails, and the training they go through to keep the peace. FOX 21’s Dan Hanger reports.

For corrections officers at the Douglas County Jail, things can get a little colorful at times, and the men and women in uniform are always ready for the very worst to break out.

“Instead of paint, the balls are loaded with a PAVA powder or a pepper powder,” said John Ondrik, a jail training/gang specialist.

Tools like the pepper ball launcher are used during extreme cases, such as riots or standoffs.

Other than that, officers only arm themselves with pepper spray and sometimes a Taser. 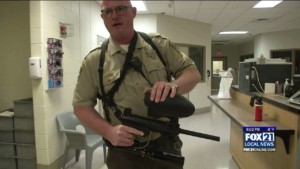 “Because if you introduce something like a firearm inside a correctional facility and it gets into the wrong hands — that is a huge, huge danger,” Ondrik explained.

Ondrik says the most valuable weapon on the job is actually a combination of always watching, listening and using solid communication skills.

“I get to be familiar with them, familiar with their behaviors, maybe we can joke a little bit, but it never got any further than that. When it goes beyond that — too personal, exposes weaknesses, and it can be dangerous,” Ondrik said.

The Douglas County Jail is a multi-level facility in the Government Center built in 2003.

There were a few weeks last summer, however, when the jail was packed at around 208 inmates.

“That’s a huge challenge. I mean, when you hit those kinds of numbers, then you really have to scrutinize everything,” said Jail Operations Lt. Tyler Edwards. “Without a safe and secure facility, keeping staff safe, keeping other inmates safe, that’s the whole premise of a jail.”

Part of his job is making sure daily evaluations are made for potential weaknesses in the system. 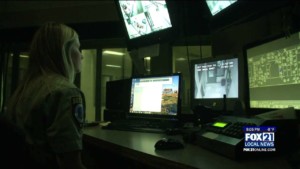 “Everything from as minor as a door working properly, up to something as major as gang activity in the jail that can cause major issues for the staff,” Edwards said.

And while gang activity can be clear to point out, it’s the quiet inmates that can be just as dangerous.

But even with all those eyes, inmates have nothing but time on their hands, which can lead to home-made weapons like a piece of wood from a scrabble game shaved down into a fine point, or a cleaning brush in the process of getting sharpened.

“It makes you self-aware of how dangerous things can get and the possibilities that you could get very hurt by an item like that,” Edwards said.

“All the decisions we make we work as a team and base them on what’s safe for individuals,” Galovich said.

Galovich says while officers have been assaulted or injured over the years, nobody has been killed in the history of the jail.

But that doesn’t stop his team from taking the rules seriously — big or small — like not allowing inmates to share food with each other. 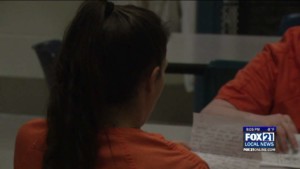 “It’s because people can strong arm and manipulate people give up their food. So there are typically safety and security reasons behind a lot of things that they do,” Galovich said.

It’s a unique profession in law enforcement that’s not for everybody.

“You never quite feel like you can relax as a jailer. Your stress levels and your radars are always going off,” Edwards said.

But it’s a line of work that’s rewarding when the community inside and outside the jail is safe.

“These people are going through the hardest part of their lives – some of them. And it’s our jobs to kind of keep the peace. Keep everybody calm and safe,” Ondrik said.

The Sheriff’s Office is always looking for people interested in becoming a corrections officer at the jail.  All you need to have is a valid license, be 21 years or older, have a GED or high school diploma and a clean criminal record. The rest is trained on the job and starting pay is roughly $20.00 an hour.

To go inside the St. Louis County Jail, click here.