Mayor Emily Larson made the proclamation at a private lunch with the Duluth-raised comedian and her family. 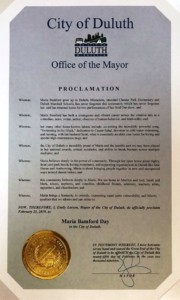 “I can’t believe I’ve made it. It’s all I’ve ever wanted,” Bamford joked in a short video posted to Facebook by her sister, Sarah.

Bamford is in Duluth for her comedy tour.

She performed to a sold-out crowd at the NorShor Theatre Monday night for the second night in a row.

Bamford, whose parents and sister live in Duluth, most recently got nationwide attention for her semi-autobiographical Netflix comedy series “Lady Dynamite.”

Rolling Stone magazine even named Bamford one of its 50 funniest people.