At Least 14 Dead Amid “Catastrophic” Damage In Tornado Outbreak 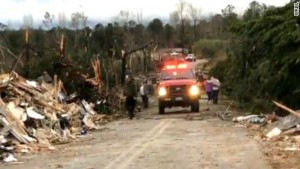 (Associated Press) – An Alabama sheriff says at least 14 people are dead amid “catastrophic” damage from a possible tornado, and more people are missing as crews search through wreckage and debris.

Lee County Sheriff Jay Jones told WRBL-TV on Sunday that damage in his community followed a path several miles (kilometers) long and appeared up to a fourth of a mile (.4 kilometers) wide.

Jones said: “I can say that at this time we have 14 confirmed fatalities. And again, the search continues. We still have some people that are reported missing.”

He adds that several people have been taken to hospitals, “some of them with very serious injuries.”

Weather officials say an outbreak of tornadoes occurred Sunday afternoon across a wide area of the Southeast as severe storms crossed the region.

Proctor Softball Picks Up Bounce Back Win Over Greenway