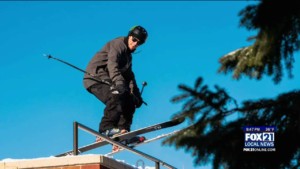 DULUTH, Minn.- A part of Minnesota-Duluth’s campus turned into an extreme skiing event for a professional skier who took home Gold in the 2012 X-Games.

X-Game Gold Medalist Tom Wallisch used the campus of UMD for some extreme skiing, being filmed for his YouTube page.

Just Tuesday, Wallisch posted pictures from the photo shoot to his nearly 300,000 fans on his Facebook. Wallisch began making videos on Youtube in 2007, trying to build up a world wide presence when his video “Superunknown” took the ski world by surprise.

In an interview at the beginning of the year during the X-Games, Tom Wallisch said “these kids are inspired by me? I want to try harder to impress more people, to inspire more people. The feedback from those first videos is really what made me the skier I am today”.

And in 2012 during the Winter X-Games in Colorado, Wallisch made history taking the Gold getting the highest score in Skiing Sloop style history.

But the worldwide fame, hasn’t stopped Wallisch from traveling the country to continue to explore and show off his craft while filming it along the way for extreme sports fans.

The video shot at UMD will be released in September on Wallisch’s YouTube page. He plans to be back in Duluth for more filming next winter. For a link to Wallisch’s Youtube page, click here.