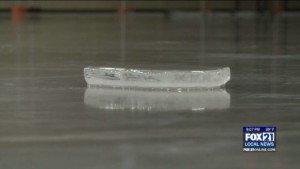 DULUTH, Minn.- Tonight, a major ice failure at the DECC has ended the season early for the Duluth Curling Club.

As for the ice, the DECC’s ice maker, tells us a part malfunctioned with the oil pump causing the compressors to shut down.

Keith Sauber, Ice Maker at the DECC said “I’m not sure what exactly what the plans are, but I’m assuming that curling stops now and what is what is”.

The ice maker says a complete melt down like this one has never happened before.