DULUTH, Minn. —  Duluth police are investigating a shooting in the heart of the city’s downtown that left one man with a gunshot wound to the face, according to authorities.

The call came in about 11:20 p.m. Tuesday for a report of a shooting on West Superior Street between 1st Avenue West and 2nd Avenue West.

The crime scene tape focused around less than half a block of West Superior Street where some personal belongings of the victim could be seen in the middle of the street in front of the U.S. Bank building and North Shore Bank, as seen in the picture below, according to FOX 21’s Dan Hanger who was on scene around 11:40 p.m. 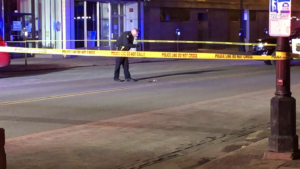 Police officers had their flashlights pointed to the ground shortly after the shooting scanning for any evidence.

Duluth Police Lt. Robert Shene confirmed the shooting victim to be a male. He said the victim was alive and hospitalized in stable condition as of Wednesday morning. 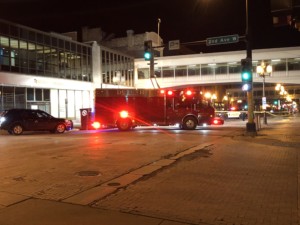 hile the suspect was not in custody as of early Wednesday, Duluth police say they do not believe there is a threat to the public, as the victim and suspect are known to each other.

Investigators are looking over surveillance video in the area.  Lt. Shene said a Duluth police officer was a witness to the shooting, heard shots fired and saw the victim fall to the ground before the suspect ran away.

We’ll have more on this story as it becomes available from the Duluth Police Department.