She was the 17th pick overall. 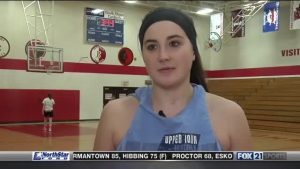 egan Gustafson was drafted seventeenth overall in the WNBA draft on Wednesday night to the Dallas Wings.

This comes on the heels of a banner year for Gustafson who helped lead the Iowa Hawkeyes basketball team to the Elite Eight.

She also won a slew of national awards including the prestigious Naismith Award for the best collegiate women’s basketball player of the year.

She was only the fourth Division I female basketball player to eclipse 1000 points on the season.

Also, she’s the only women’s player in history to score 27.8 or more points, 13.3 or more rebounds, and shoot 69.6 percent or better from the field.