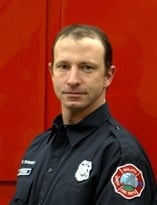 DULUTH, Minn.- Duluth Fire Chief Dennis Edwards submitted a letter of resignation Friday after a being arrested on charges of driving while intoxicated last month.

Edwards will stay with the department in a demoted position of assistant fire chief.

Interim Chief Shawn Krizaj will continue in that role for now.

According to a criminal complaint filed in St. Louis County Court, Edwards was pulled over on March 30 at approximately 11:40 p.m. after a St. Louis County deputy observed an SUV heading northbound on Rice Lake Road attempting to pass a vehicle in a no-passing zone.

The deputy performing the traffic stop stated he detected a strong odor of alcohol and observed Edwards’ eyes were glossy and bloodshot.

Edwards had a blood-alcohol content almost three times the legal limit at .22 when pulled over.

According to court records, Edwards made his first appearance in court Thursday morning.