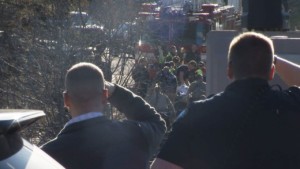 DULUTH, Minn. — A death investigation is underway after a body was found Tuesday evening in Chester Creek.

According to the St. Louis County Sheriff’s Office, a passerby spotted the body lying face down around 4:30 p.m. under the Chester Creek Bridge on East 9th Street.

Authorities believe the victim is an adult male.  Investigators do not suspect foul play, according to the Sheriff’s Office.

As of 6 p.m., the St. Louis County Rescue Squad was working to remove the body from the creek.

Duluth fire and police departments also responded to assist in the recovery effort.

Officials believe the death may have been self-inflicted.

The name of the victim was not released Tuesday evening pending notification of family.