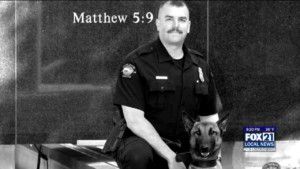 People lined the street during Haas’ funeral procession, and they’d later pack the DECC for his memorial.

As FOX 21’s Dan Hanger reports, Aaron and his wife open up about that life-changing night and how they’re creating the next chapter that now includes a new K-9 in training named Luna.

“We left like any other day.  Holly and the kids in the living room, said goodbye. Hugs, kisses — that type of stuff,” Aaron described of his day before heading to the call Jan. 13, 2019 that would change their lives forever. 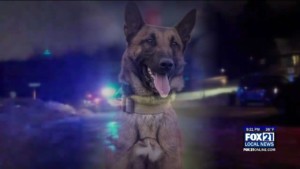 “The door opens and there the guy is right inside the door way, gun’s coming up like this,” Aaron described of the moments before shots were fired. “Can see the gun in his hand, pop-pop-pop, as I’m letting go of my dog’s collar and saying get him.”

Dispatch: “Do we need medical up there?” 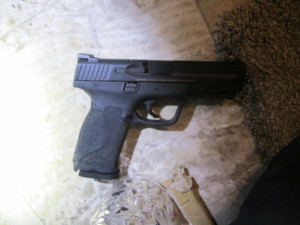 Aaron was struck by a single bullet, which struck the very edge of the ballistic protective panel inside his vest.

“Just how close it was to missing, and if it had missed, I’d almost certainly be dead,” Aaron said.

During the rush of adrenaline immediately after the shooting, all 30-year-old Aaron could think about was his K-9 partner.

Haas, 3, would eventually appear from the crime scene.

“Runs up — lays down right next to me in the middle of all of this. There was that initial thought of — I hope he’s acting weird because I had got shot,” Aaron said.

But that wasn’t the case. Haas was suffering from a gunshot wound to the neck.

The bullet entered through the vest, but just missed the edge of the protective panel inside.

Officer: “I need a car to get this dog to the vet right now. Let’s go!”

Officer: “Contact the emergency vet and let them know we’re going to be bringing in a dog with a gunshot wound. 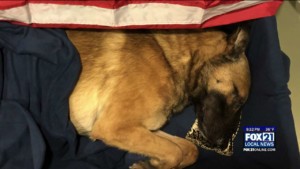 K-9 Haas in his casket

A Duluth firefighter helped work on Haas until arriving at the vet.

“First thing is he’s asked is how far do you want us to take it, or something along those lines. And he said, that’s a police officer on that table. You do everything you can. And they did absolutely everything they could to try to save him, but it just wasn’t going to happen,” Aaron said.

“He called to let me know that he and Haas had both been shot, and then from there it was all kind of a blur,” said Holly, Aaron’s wife.

“My heart broke for Aaron because they were such an amazing team and they had so much more to come. And my heart broke for the girls that they had to learn at such a young age that things like this happen,” Holly explained.

Aaron was released from the hospital the night of the shooting. 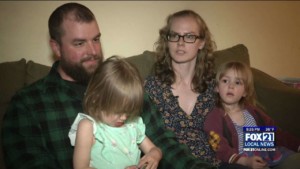 He took a month off of work to be with Holly and their two daughters Ila, 3, and Maddie, 2, while trying to heal in a very public way at times.

“The night of the procession for Haas’ remains was unreal. Hard to even to describe. Just the outpouring of support was amazing,” Aaron said.

And that support extended to the memorial for Haas — the first K-9 killed in the line of duty in the history of the Duluth Police Department.

“It breaks you up. It’s tough to watch one of your people be so heart broken, and to really be in so much pain,” said Duluth Police Chief Mike Tusken.

Tusken said the community’s support through the whole ordeal was something he’s never seen in his nearly 30-year career with the department.

“We rallied together and supported one another and the community support was tremendous and we came out the other side, I think, stronger. But boy there were some dark days after this happened,” Tusken said. 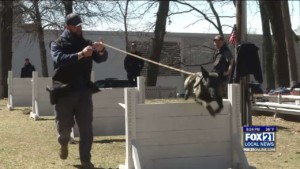 Haller and K-9 Luna at training in St. Paul

Dark days Aaron is trying to leave behind to begin the next chapter back on the street with his new 1-year-old K-9, Luna, fully funded by community donations of roughly $20,000.

The two are in their third and final month of training with the St. Paul Police Department — the same program Aaron and Haas went through two years ago.

Aaron’s bond with Luna has grown over the past nine weeks.

“She’s excited. She wants to do stuff with me and what not, so it’s — I’d say it’s where it should be now. It was slow going at first – definitely,” Aaron said.

Slow going in part because Luna was all about softer voices from females at first.

“Say like the sergeant comes out — female sergeant — says one thing, and she just loses it and is like super happy, wagging her tail, ya know — damn it,” Aaron laughed. 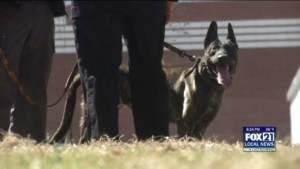 “Aaron is doing a great job. He’s doing a wonderful job with Luna, and I think the presence of Luna has probably helped with some of that healing for Aaron,” said Robert Vetsch, and 21-year veteran with the St. Paul Police Department and head K-9 trainer.

“K-9 Luna has done nothing but prosper with Aaron, and that lies a lot with Aaron. He’s doing an exceptional job. He’s a gifted handler. And we’re fortunate to have him back,” Vetsch said.

“Very, very good potential with her from everything I’ve seen so far. No big issues or anything like that, and she’ll make for a very good partner, I think” Aaron said.

Meanwhile, back at home on the weekends when not training, Luna is helping to create a new normal for her law enforcement family — a family that’s experienced something most will never face.

“I would definitely say it’s been life-changing. I feel we’re different people. We’re a different family than we were before this happened,” Holly said.

For Holly, phone calls from Aaron bring her back to the moment he called to say he’d been shot.

“It’s just kind of hard to breathe until I can hear him talking, to hear from the tone of his voice he is OK. And I don’t know how long that will continue for,” Holly explained. 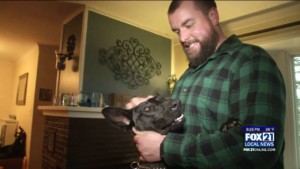 For Aaron, his priorities in life are more focused than ever before.

“Ultimately when it comes down to it, what’s really important is right here, in this house,” Aaron said.

But when it comes to his profession, he says nothing will detour him from his love of being a K-9 officer, as long as his family supports it, which they say they do.

“There’s this line we use a lot in the department, when you’ve been doing this as long as I have, and seen some of the things I’ve seen, I just couldn’t picture doing anything else, really,” Aaron said.

And as for the girls with so much life to live, their short years with Haas remain close to their hearts.

“I’m so glad that we had him and they got to experience him, and I hope that they’ll remember him,” Holly said.

“What was your favorite part about Haas,” Hanger asked Maddie. 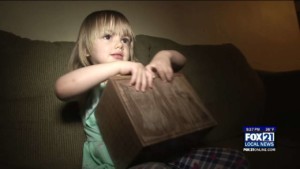 And soon those kisses will be full time with K-9 Luna as she and Aaron cross the finish line of graduation as a new team on the streets of Duluth.

“Just focused on getting better each day and improving and see it more and more come out, and she will make one hell of a dog, absolutely,” Aaron said.

The 27-year-old suspect in the shooting died from a single self-inflicted gunshot wound to the head.

Meanwhile, the Duluth Police Department sent K-9 Haas’ vest to the manufacturer for potential improvements to the vest’s design.

DPD officials recommend a modification to the vest’s stitching to allow more coverage of the protective panel inside.

And as for Aaron, he’s hoping the community will realize even more now how important it is to support the police department and its needs, like riot gear or even the purchase of an armored vehicle like the much-smaller Superior Police Department has to not only protect officers from high-powered assault weapons — but also the public.