In encounter with police, shots were fired and subject was struck by squad car 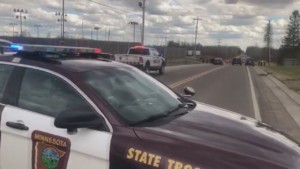 HERMANTOWN, Minn. – A suspect is dead after an officer involved shooting Saturday in Hermantown.

Accrording to the Minnesota Bureau of Criminal Apprehension (BCA), two Hermantown police officers and a St. Louis County sheriff’s deputy shortly after 3 p.m. pursued a motorcyclist who was traveling northbound on Midway Road just past West Arrowhead Road at speeds in excess of 100 miles per hour. The officers called off their pursuit near Miller Trunk Highway and Ugstad Road.

St. Louis County and Hermantown law enforcement personnel rendered medical aid but the subject was pronounced deceased at the scene. The deceased will be taken to the Midwest Medical Examiner’s Office for identification and autopsy.

Additional information, including the names of the deceased and the deputies involved, will be provided once identification and family notification has taken place and the initial round of interviews is complete.