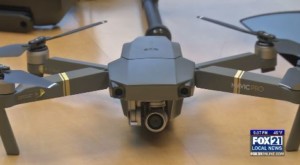 DULUTH, Minn. – It’s been about a year since Superior Police and fire departments received another drone for emergencies, thanks to a $20,000 grant from Husky refineries.

They say thus far it has been very beneficial.

The fire and police departments say the new drone has zoom and thermo- technology cameras to look closely at incidents they respond to.

One was even used last year to respond the Husky Explosion.

Superior police say they recommend drones for departments across the country.

“It’s changed the way we police and I’m sure the way we fight fires. We are incredibly lucky our community can have this amount of technology,” said Superior Police Public Information Officer Bradley Jago