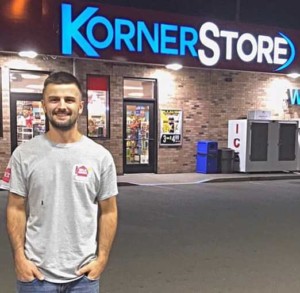 DULUTH, Minn. (Press Release) – Born and raised in Western Duluth, entrepreneur Derek Medved, announced his candidacy for City Council at Large today in front of his Gary Korner Store.  Medved grew up in Gary within blocks of the Milk House convenience store and gas station at 1331 Commonwealth Ave. that he purchased at age 19 after the store encountered financial difficulties and had closed.  “The store was a centerpiece for Gary,” said Derek “It’s a close-knit community, and the store was very missed. It served a great purpose. It just left a huge void in the neighborhood. I do not come from money but I was taught to save and to always be careful about how I spent my money. I penny pinched from the time I had my first part time job and saved and saved. Then, with the support and belief from a local financial institution, I was able to realize my dream.”

Today, having just turned 24, Medved operates four Korner Stores (included the Milk House in Gary), has recently been named one of “20 Under 40” by the Duluth News Tribune and wants to use his passion and experience to give back to the community he loves.

“Public Safety, streets and infrastructure, business climate, housing and rising property taxes are priorities that I feel need our undivided attention as a community” said Medved. “They should be our top priorities. As a young person growing up here, a Duluth Denfeld graduate and a business owner, I have seen and experienced the challenges we are facing today and want to be a big part of moving Duluth city government back to the basics of serving its citizens.”

Derek understands the importance of what the Milk House meant to Gary and realizes that every neighborhood in Duluth has its own identity and challenges. Medved will bring his energy and fiscal responsibility to the Duluth City Council and be an advocate for people and businesses that live and work here.

There are two At Large council seats open this November.  Noah Hobbs and Arik Forsman, both At Large councilors, are running for reelection. Stephen Abernethy, Mike Mayou and Matthew William Stewart are also running.  For a complete list of candidates in all city races, click here.