Superior Councilors Sutherland, Van Sickle Call To Censure Each Other

SUPERIOR, Wis. – Heads are butting at Superior City Hall as two councilors have introduced resolutions to formally censure each other at Tuesday night’s city council meeting.

Acting Council President Craig Sutherland is calling to censure Councilor Jenny Van Sickle over her recent social media blast against longtime City Attorney Frog Prell after Prell concluded it is legal to select a council president by drawing from a deck of cards if needed, which is something Mayor Jim Paine has said is illegal.

“Prell has a long established reputation of repugnant incompetence. No one of merit would take this seriously. The opinion itself is riddled with manipulated and irrelevant citations and plenty of contradictions and worse, pure laziness.”

Meanwhile, Councilor Van Sickle has a resolution on the agenda to censure Sutherland for what she calls a violation of the council’s code of conduct and for ethics violations regarding personal attacks.

The resolution lists those attacks as “digital stalking,” using vulgar language in official government emails and being intoxicated during a “bar brawl” last year, among other allegations that can be viewed in the image below. 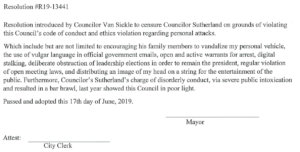 Click here to view the amended council agenda with the full censure resolutions.

The council meeting starts at 6:30 p.m. Tuesday in the Government Center.

City Attorney Prell will also talk about his conclusion that a game of chance is legal to help the council vote in a new council president after three failed attempts with one councilor always abstaining so that a tie-breaking vote could not be cast by Mayor Paine.

Councilor Dan Olson has said councilors who have abstained are doing so to keep the mayor’s power in check.

Mayor Paine has said he was elected to break tie votes, not play cards to elect a council president.

Thomas the Train Canceled for 2020