Raptor Ridge is an Exhibit Five Years in the Making, Costing $120,000

DULUTH, Minn. – As thousands of runners make their way into Canal Park Friday, others will flock to the Great Lakes Aquarium in Duluth for the opening of their new exhibit, Raptor Ridge.

Officials with the Aquarium believe the new experience is full of lessons and environmental education.

As the head of the Aquarium, Walker has a soft spot for many creatures and the belonging here on planet Earth.

“We like to tell a whole story. It’s not just about water. It’s about the ecosystem and everything that lives in this area,” said Walker.

He’s now thrilled to invite the public to the Aquarium’s newest nest, home to a longtime resident back on display.

“Because of his injuries, he [Bogey] wasn’t able to be released into the wild, and then became an education animal. And that’s where places such as the Aquarium can then showcase these animals, get an up close connection and understand how important they are to our environment,” said Walker.

Bogey the Bald Eagle has lived at the Aquarium since 2001, but for the past seven years his injuries and lack of a proper exhibit have forced him away from the public.

“Now we have a beautiful area for him,” said Walker.

Bogey will share this new indoor/outdoor exhibit with Horus the Turkey Vulture. He came to the Aquarium in 2018.

“These animals are beautiful; they’re such a big part to our ecosystem and our area. They have a great story. There was a time when people didn’t see eagles very much, and now you do,” said Walker.

Not only will visitors have the chance to witness these majestic birds up close and personal, but folks can also take flight by testing their wingspan and learning a few fun facts about our feathered friends along the way.

“As time goes on, as the aquarium goes on, we’ll always have a great facility to house these animals,” said Walker.

The new exhibit has been in the works for roughly five years, with a total price tag around $120,000.

The remaining paper barrier will be ripped off the glass display Friday, June 21 when the exhibit fully opens to the public. 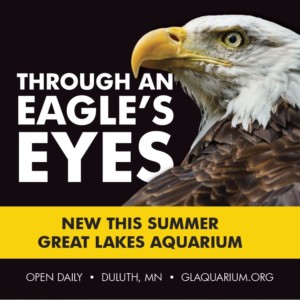