Officials Say Relief On The Way From Smoke Due To Wildfires 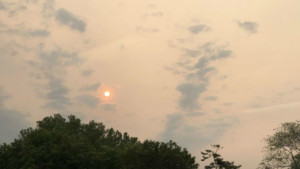 FARGO, N.D. (AP) — A smoky haze continues to hamper many areas in northwestern Minnesota and eastern North Dakota as a result of the wildfires in Canada.

The Minnesota Pollution Control Agency issued an air quality alert through Sunday for the northern part of the state. The agency says conditions were expected to improve later in the day as winds move the smoke to the east.

In some areas visibility decreased to less than 1 mile due to the dense smoke. The haze extended as far south to the Fargo, North Dakota and Moorhead, Minnesota area.

Officials say the smoke may cause problems for people with asthma and other lung conditions, and suggested that people in affected areas may want to take precautions and limit physical activity.

Thomas the Train Canceled for 2020