Mayor Larson: Continued Use of Hydrogen Fluoride at Husky Unacceptable

DULUTH, Minn. – Duluth Mayor Emily Larson released a statement Thursday afternoon that she will be “asking the Duluth City Council to vote on a resolution that requests that the EPA review usage of hydrogen fluoride in refineries throughout the country.”

“On multiple occasions since the Husky Refinery explosion on April 26th, 2018, I have urged Husky to reconsider its use of hydrogen fluoride (HF).

I believe our communities have not been made aware of the extent to which HF is dangerous, nor have we been given proof that safer alternatives are not viable.

The urgency is clear, now, with three major incidents at facilities using HF and the Chemical Safety Board (CSB) urging the Environmental Protection Agency (EPA) to re-study this issue (something not done since 1993).

Below is an article about the CSB’s urging the EPA to act, as well as a letter I sent to Husky earlier this year asking that Husky prove that HF is the safest choice, not the most expedient, or least expensive, the safest for our community, this region, and their workers.

This is why I will be asking the Duluth City Council to vote on a resolution that requests that the EPA review usage of HF in refineries throughout the country to avoid potential future catastrophes.

From the article, and a CSB executive:

“We’ve now seen three incidents — major, catastrophic process safety incidents at refineries that use (hydrogen fluoride) for alkylation in four years,” said Kulinowski. “So, I would say that there is a sense of urgency around the issue of exploring the safety issues related to the use of (hydrogen fluoride).”’

Superior Mayor Jim Paine also released a statement on the issue saying, “I support Mayor Larson’s resolution and join in her call for the EPA to review the use of hydrogen fluoride at all American refineries. The goal of the Superior refinery and all of its regulating agencies must be the safest possible refinery for the employees of the refinery and the neighborhoods that surround it.”

“We understand there continue to be concerns. Before coming to our decision in April, we undertook a rigorous evaluation of hydrogen fluoride options and alternatives and that analysis concluded the alternatives were not commercially viable or introduced significant risks for the Superior Refinery. There was no release of HF during last year’s fire and all safeguards worked as designed. As part of our rebuild plans, we are incorporating additional safety enhancements.

We remain committed to the future of the refinery, our employees and the community and want to ensure it will continue to contribute to the economy of the region for decades to come.”

You can read her full post by clicking here. 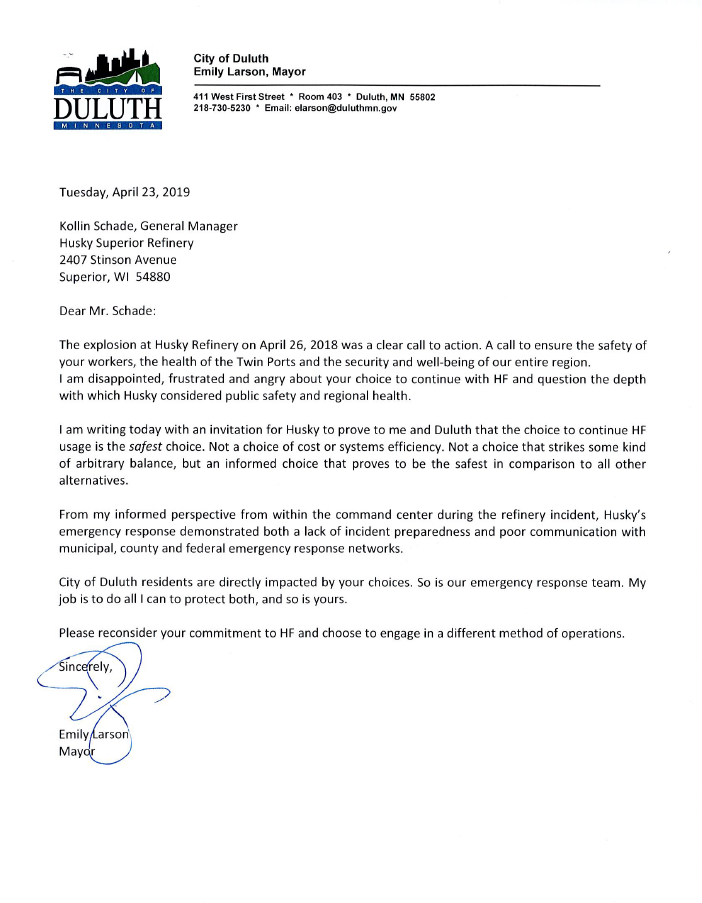