After A Hot & Humid Day, Severe Thunderstorms Tore Through The Northland

BRUCE, Wisc. — A confirmed tornado touched down in Bruce, WI Monday night at 7:15. No damage has been reported yet, the NWS will be out there surveying the area Tuesday. 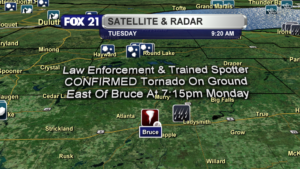 As Severe Thunderstorms rolled across the Northland, many trees were knocked down in the strong winds that gusted up to 52mph. 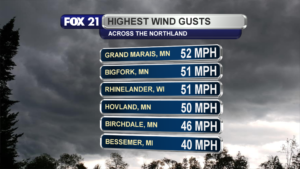 Several large poplar trees were uprooted in Marcell, MN. They are lying in a ditch along HWY 38, 3 miles south of Marcell.

Tree tops were blown off of some trees at Island Lake, MN . Pontoon covers were also ripped off and blown away on the south side of the island.

Babbit, MN has a large tree down over New Tomahawk Road from the high winds.

Iron Junction, MN has many trees limbs knocked to the ground that were 6-8″ in diameter.

Wakish, MN has trees blown down across HWY 72.

Long Point, MN near Lake of the Woods reported a brief funnel cloud, but no touchdown.

Washburn, WI has trees knocked down from the powerful winds.

Webster, WI had a 5″ in diameter pine tree on the ground.

Rock Creek, MN a 14 inch tree fell and damaged a garage, vehicle and a light pole due to the high winds. 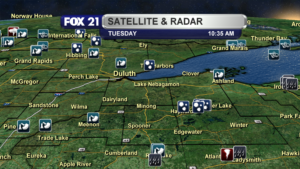 The Boundary Waters Canoe Area Wilderness also had a line of severe thunderstorms push through too. The winds picked up and heavy rain fell. No injuries have been reported.

Meteorologist Brittney Merlot says, “If you are ever caught in the wilderness and high winds are headed your way. Go to the edge of the island or landmass near the water, face upstream (towards the wind) in an area where there are no or minimal trees. This will keep you safe from trees falling on you. Although you will get wet with rain and waves, it’s better than a tree!”

Up to 3.5″ of rain poured down on the Hayward Lakes region too, causing a Flash Flood Warning Monday night.

Hail was reported from pea size to quarter size. 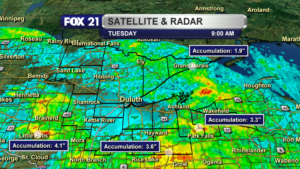 High winds are also possible again, alongside strong and dangerous rip currents on Park Point and Wisconsin Point on Wednesday.

Temperatures will be a tad cooler though, into the 70’s – refreshing after the humidity and heat we’ve been recently dealing with.

US Puts 8,500 Troops on Heightened Alert Amid Russia Tension