Trump Tweets he Will Win Minnesota in 2020

The Tweet focused in on Minnesota U.S. Rep. Ilhan Omar calling her an anti-semite.

WASHINGTON, D.C.-In the early morning hours, President Donald Trump vowed to win Minnesota after sending out a Tweet at 5:51 a.m.

The Tweet focused in on Minnesota U.S. Rep. Ilhan Omar calling her an anti-semite.

“In 2016 I almost won Minnesota. In 2020, because of America hating anti-Semite Rep. Omar, & the fact that Minnesota is having its best economic year ever, I will win the State! “We are going to be a nightmare to the President,” she say. No, AOC Plus 3 are a Nightmare for America!”

Trump lost Minnesota in 2016 by less than two percent of the vote. 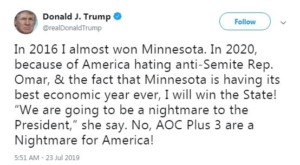 Lester River Rendezvous Canceled For First Time in Over 20 Years