This is a Developing Story 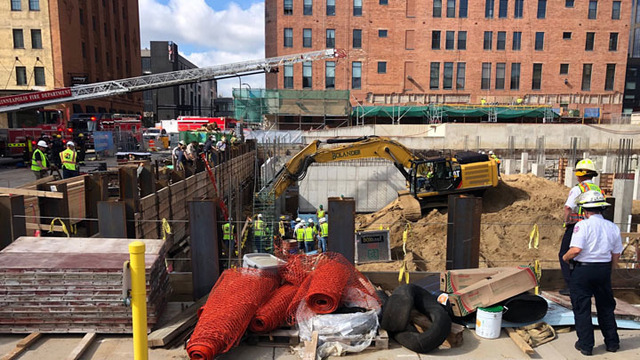 UPDATE: MINNEAPOLIS (AP) – A worker has been freed after being trapped for three hours in a trench that collapsed at a construction site in downtown Minneapolis.

Deputy Minneapolis Fire Chief Todd White says the worker was talking, alert and in stable condition when he was lifted out in a stretcher-basket around 11 a.m. Monday. The man was placed in an ambulance and taken to HCMC for treatment.

A wall at the below-ground site gave way just after 8 a.m. The worker was alone and was trapped in sand up to his knees. One of his legs was caught in shoring that also collapsed.

The Star Tribune reports technical rescue teams from the Minneapolis and St. Paul fire departments worked by hand to free the man.

The cause of the collapse is under investigation.

MINNEAPOLIS (AP) – Crews are freeing a worker trapped when a trench collapsed at a construction site in downtown Minneapolis.

Minneapolis Fire Chief John Fruetel says the man was trapped up to his knees in sand when the collapse happened around 8 a.m. Monday.

The worker apparently was not hurt. The cause of the collapse is under investigation.