Duluth BizPac Threatens To Sue City, DTA Over Removal of Its Bus Ads

DULUTH, Minn. – Duluth BizPac — a political action group with a goal to support and attract local businesses — is threatening to sue the city of Duluth and the Duluth Transit Authority after their bus ads were abruptly taken down.

“If we’re going to have open dialogue, this is not the way to do it,” said Rob Stenberg, president of BizPac.

BizPac calls the removal of their ads from the DTA buses politically motivated and a violation of the first amendment.

And the group wants the ads back up as planned through at least the end of the summer to avoid filing suit. 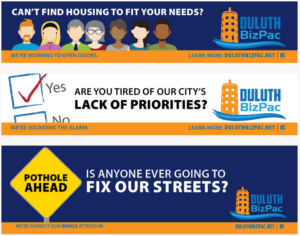 “I don’t question that it’s politically motivated. I firmly believe it is,” Stenberg said.

Stenberg, a former city councilor himself back in 1999 through 2002, is baffled that the DTA removed the previously approved BizPac ads off its buses just two months into a summer long campaign.

“It’s been a very confusing process to us. We’ve just been saying hey, these are not controversial issues. It’s about housing. It’s about priorities. It’s about the streets. Those are three issues that every single candidate for office in the city of Duluth is talking about,” Stenberg said.

Stenberg says the DTA told BizPac the ads were against policies and standards for advertising.

BizPac appealed and was told they could only use one of its three ads — “Can’t find housing to fit your needs?”

The other two ads were considered still in violation:

“Are you tired of our city’s lack of priorities?”

And “Is anyone ever going to fix our streets?”

BizPac has put the city of Duluth and the DTA on legal notice for a possible lawsuit saying the removal of the ads violates free speech and that BizPac is being discriminated against. 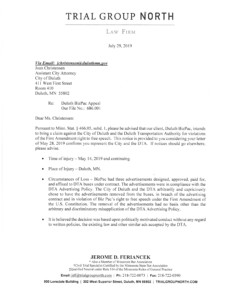 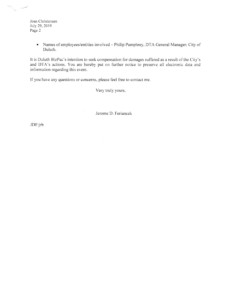 Stenberg points to what he believes is a much more controversial ad on the DTA from the Women’s Health Center — now the WE Health Clinic — which is a local provider for abortions.

As for the abrupt removal of the ads, BizPac does not know what initiated it.

However, when FOX 21’s Dan Hanger talked to City Attorney Gunnar Johnson back in May about all of this, he said complaints from “city staff” initiated the discussion and that policy and procedures for advertising on the DTA buses supported the removal.

BizPac says it won’t file a lawsuit if the ads get put back on the buses.

BizPac was formed in the fall 2018 with a focus on “supporting or opposing initiatives and candidates that will affect directly or indirectly Duluth area businesses,” according to a statement on its website.

Stenberg says the city of Duluth has repeatedly overstepped its welcome and is scaring new business away by telling businesses how to run their business – from the passing of Earned Safe and Sick Time (ESST), to changing the legal age to purchase tobacco from 18 to 21 while banning the sale of flavored tobacco at convenience stores, to adding the half-percent sales tax on customers’ bills to pay for streets.

“When the city government gets so involved in local business instead of trying to foster a growing business community, and the city tells business how to do business … for example, you’re 18 years old, you can smoke in the city of Duluth but you can’t buy one, that to business sends up big red flags,” according to Stenberg.

President Trump Set to Arrive in Duluth at 8 p.m. for Rally