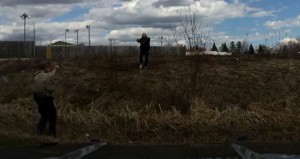 HERMANTOWN, Minn.-The St. Louis County Attorney’s Office has ruled that the two officers involved in killing a suspect in Hermantown in May, were justified.

“Their actions [were] taken in self-defense of both themselves and others,” said St. Louis County Attorney Mark Rubin.

The suspect, Timothy Russell Majchrzak, 37, died after being shot by deputy Jason Kuhnly and then hit by a vehicle driven by deputy Troy Fralich.

According to their investigative reports, the events were put into motion after Majchrzak refused orders by Deputy Kuhnly to drop a handgun he was brandishing. This happening after a high-speed chase near Highway 53 and Stebner Road behind Skyline Lanes, where the suspect was on a motorcycle.

Rather than comply with Deputy Kuhnly’s directives, Majchrzak chose instead to fire at Deputy Kuhnly, placing the deputy in danger of great bodily harm or death. Squad car video also revealed the suspect placed a gun to his head during the incident

In response, Deputy Kuhnly opened fire, fatally wounding Majchrzak. Deputy Fralich, observing the encounter, was in his police vehicle and when he saw Majchrzak raising his firearm again, responded to assist Deputy Kuhnly, and employed a means available at that time, his vehicle, to protect Deputy Kuhnly from great bodily harm or death at the hands of Majchrzak.

Deputy Fralich drove into Majchrzak, knocking him off the roadway and on to the ground.