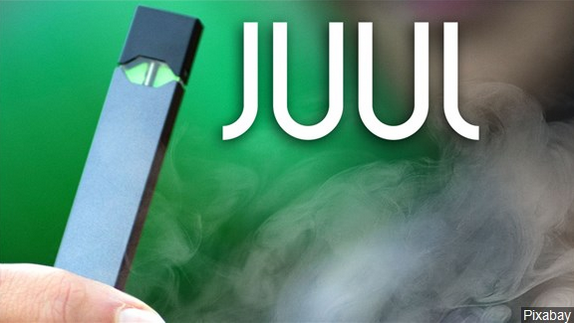 NEW YORK (AP) – Juul Labs will no longer promote its e-cigarettes in print, digital and TV advertisements and is replacing its CEO amid an escalating backlash against vaping nationwide.

The nation’s largest e-cigarette maker also pledged Wednesday not to lobby against a sweeping ban on vaping flavors proposed by the Trump administration earlier this month.

Juul announced its CEO, Kevin Burns, will step down and be replaced by a senior executive from Altria, the maker of Marlboro cigarettes. Altria took a 35% stake in Juul in December at a cost of $13 billion.

The shakeup comes amid growing public furor over vaping that has triggered calls for tighter restrictions at the federal and state levels. On Tuesday, Massachusetts proposed banning all vaping products for four months.

Public health officials are investigating hundreds of cases of the breathing ailment but have not yet identified any one product or ingredient. At the same time, underage vaping has reached epidemic levels, according to top government health officials, with more than 1 in 4 high school students using e-cigarettes in the last month.