ESKO, Minn.- We are learning the cause of death for the 15-year-old Esko football player who collapsed and died Friday night during the Eskomos football game in Aitkin.

According to the Ramsey County Medical Examiner’s Office, the death of Jackson Pfister was natural due to congenital heart disease.

Two days following the death of their teammate, Esko football players returned to the field Monday to prepare for their final game of the season at home Wednesday night. The team was thinner than normal as sophomores had the chance to skip practice because of Jackson’s death.

Meanwhile, the Esko girls soccer team honored Jackson Monday with his initials and jersey number written on their wrists during their game against Chisago Lakes. 10th grader Riley Mcilvain grew up with Jackson since they were kids.

“He was a really nice genuine guy. Everyone knew him no matter what grade you were in. if you watched football or baseball. I grew up with him throughout school, I didn’t really hangout with him, but I talked with him in the halls. He was really nice, he talked with anyone in the halls, help you out in school”, said Mcilvain.

“Jackson was a tremendous young man.  Wise beyond his 15 years.  Compassionate.  A natural leader.  Very driven and competitive.  Most importantly, extremely kind and caring. I am saddened to know I will not get to see the amazing man he was destined to become” 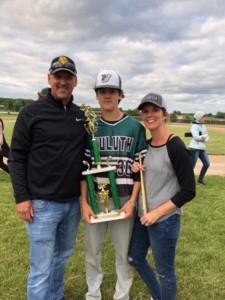 With Esko being such a close-knit community, classmates tell us Jackson will never be forgotten.

“Throughout the school and sports, through his family, friends, nobody is going to forget him and he had a special part in almost everyone’s lives in the school”, said Mcilvain.

Grief councilors remain avilable for students and faculty throughout the week. Jackson’s visitation is next Sunday from 1 p.m. until 4, at Queen of Peace Catholic Church in Cloquet followed by a memorial mass.

Survey: Wisconsin Farmland Worth 10% More Than In 2020

Reviving Ojibwe Spiritual Traditions, One Pet At A Time