The Saints trailed 20-0 at one point, but fell to Greenville in an offensive shoot-out 40-34 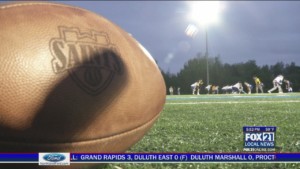 GREENVILLE, IL.- Saints quarterback Zach Edwards threw for over 500 yards, but wouldn’t be enough as St. Scholastica fell to Greenville 40-34. The first half was dominated by the Panthers as they built up a 20-6 lead going into the halftime break. Greenville would extend their lead to 27-6 before Edwards would lead St. Scholastica back from that deficit to tie things up at 27 early in the fourth.

The teams would trade scores during the midway point of the final quarter, before the Panthers scored with just 4:36 left for the victory.

The Saints move to 5-2 on the season, and are off next weekend before returning to Public School Stadium November 2nd against Iowa Wesleyan.