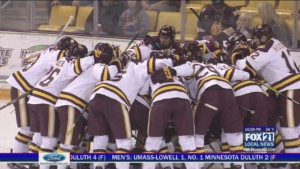 MADISON, Wis.- UMD men’s hockey put 58 shots on the Wisconsin goaltender, but fell 3-1 at Kohl Center. This was also the first time since last March that UMD would be swept in a weekend series when they took on St. Cloud State as they were unable to get their offensive game going, falling to Wisconsin Saturday night 3-1.

After a scoreless first period, the Badgers would pot two goals before Noah Cates trimmed the lead to just one. Wisconsin would add an empty netter late in the third.

UMD will be back in action next weekend with a home and home against Minnesota starting Friday night at Mariucci Arena.