SUPERIOR, Wis. — A new study has been released about the city of Superior’s operations at city hall and how it can improve to be more efficient and effective.

The study was initiated by Mayor Jim Paine and the city council, and conducted by RW Management Group, Inc.

One recommendation calls for the mayor’s position to be part-time while hiring a full-time city administrator, which the study cites is a more common approach to government for cities the size of Superior.

The report says administrators are trained to implement best practices of city government and have a non-political agenda.

And while Mayor Paine would love to hire an administrator to work under him, he says the budget doesn’t support it and the voters deserve a full-time mayor to run their city.

“The people should pick their government. Yes, I do feel confident the people of Superior can elect their leader. I think they’ve done a pretty good job. Even if I haven’t loved all of them, the mayors of Superior have all been pretty competent,” Paine explained.

Mayor Paine does agree with pieces of the report, including the dire need for modern-day software programs.

He says many departments are still relying heavily on paper, like the Finance Department for payroll and budgets.

“Our audit is showing significant findings year over year over year of mistakes — essentially in our accounting because we don’t have up-to -date financial software largely. So that’s a system-wide change that we’ve been trying to make for a while. It’s time to make it,” Paine said.

The report does call for some positions in the city to be eliminated, like the assistant finance director.

Mayor Paine says he is not in favor of any layoffs but is all about reviewing positions and changing duties for current employees to operate the city more effectively. 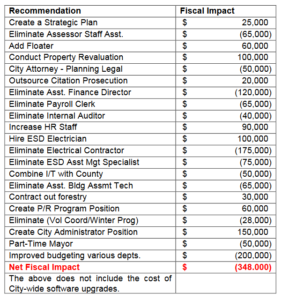 “We’ve never really had a comprehensive plan for our staffing levels. Historically hiring has always been addressed on a case-by-case basis. This study provides us with unbiased report, detailing how efficient we are as a municipality, and offers a widespread approach to improve our efficiency, adequately staff each department, and expand city services where we are lacking. We now have the opportunity to implement some of these recommendations to allow each tax dollar to stretch as far as possible. After looking at the draft report, there are some interesting recommendations, and we look forward to the presentation from the RW Group outlining their findings.” -Brent Fennessey, Council President -Craig Sutherland, Council Vice-President

The report will be presented by the consulting group on Tuesday, Nov. 12 at 6 p.m. during the committee of the whole meeting at city hall.

"Sunscriptions" Filled on the SunSpot Bus