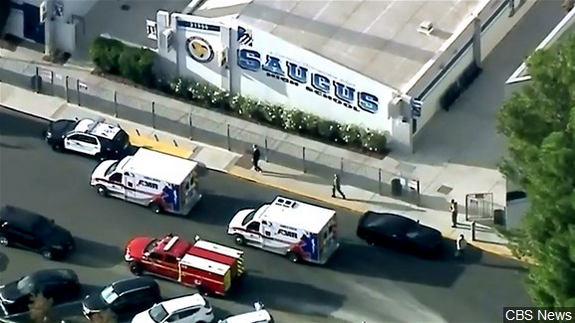 The sheriff says the suspect is a student and was one of several people taken to a hospital after the Thursday morning shooting and is alive.

Reports on the number of people injured has fluctuated.

Henry Mayo Newhall Hospital tweets it received four patients. The hospital says a female and two males are in critical condition and one male is in good condition.

School district spokesman Dave Caldwell tells the station all campus lockdowns in the district have been lifted except for Saugus High.

Department spokesman Christopher Thomas says initial accounts of at least six victims Thursday morning may have been because of duplicate reports.

Thomas says it’s not known if the patients have gunshot wounds or other types of injuries. One is being flown to a hospital and two others are being transported by ambulance.

SANTA CLARITA, Calif. (AP) 8:30 a.m. – Sheriff’s deputies are swarming a northern Los Angeles County high school where a shooting has been reported that resulted in at least six people being injured.

Television news images Thursday morning show lines of students being escorted out of Saugus High School in the city of Santa Clarita.

Several people were seen being moved on gurneys.

The Los Angeles County Fire Department says at least six people were injured. It was unclear whether all of them had been shot.

SANTA CLARITA, Calif. (AP) – Authorities say at least six people have been injured during a shooting at a Southern California high school.

The Los Angeles County Sheriff’s Department says Thursday on Twitter that deputies are responding to Saugus High School in the city of Santa Clarita.

The sheriff’s office says a male suspect in black clothing was seen at the school.

Los Angeles County Fire Department spokesman Christopher Thomas said it was not immediately clear if the victims suffered gunshot wounds or other injuries.

Saugus High School and other schools in the area have been locked down.