DULUTH, Minn. —  Two significant snowstorms will make holiday travel dangerous across the Great Lakes and both systems will drop heavy snow across parts of the Northland. 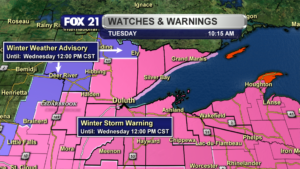 LAKESHORE FLOOD WARNING in effect until 3pm on Wednesday for St. Louis, Carlton, Douglas, Bayfield, Ashland, Iron and Gogebic counties along the lake and  St. Louis River. Strong northeast winds overnight and into Wednesday late morning will cause waves to crash on shore and coastal flooding and beach erosion is likely. Waves are expected to be 10-15 feet high.

GALE WARNING: North Shore of Lake Superior until 3pm Wednesday 10-15 foot waves will make it impossible for vessels to navigate safely out on the water. 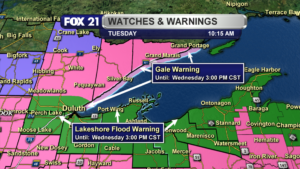 With the heavy snow and high winds, power outages are likely alongside treacherous travel. GET PREPARED TODAY! 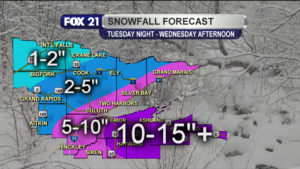 The event will start Tuesday November 26th around 7pm, first with lake effect snow setting up from Silver Bay to the Twin Ports. Winds will be increasing out of the northeast and gusting up to 25mph.

The storm will bring heavy snow around 10pm into Hayward and northwest Wisconsin, lifting into the Twin Ports around midnight. Overnight the snow will push up the north shore and into the Arrowhead and Iron Range blanketing a majority of us by early morning.

The HEAVIEST snowfall rates and highest winds will be felt Wednesday morning. Please don’t travel during this time frame. If you must, make sure to have an emergency kit in your vehicle and plan to take it slow. Visibility will be near 0 and road conditions will be slippery and snow covered. 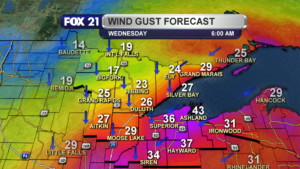 Snow tapers off around noon Wednesday but continues to slam the south shore and snowbelt through the evening. Winds will be strong out of the north up to 40mph, dumping many extra inches of snow on the south side of Lake Superior.

Lake effect winds down around 6pm along the south shore and around 9pm in the snowbelt on Wednesday.

As this system clears overnight, Thanksgiving will be a calm day to travel. Mostly cloudy skies and temperatures in the upper 20s will make for a nice holiday!

But by Friday morning, another snow storm looks to smack into the Northland. This one has the potential to drop even more significant snowfall that will span from early Friday through early Sunday. This system has the capability of dropping 1-2 feet on some of us! Stay tuned to Fox 21 Weather for updates and snow totals on the second major snow storm aiming at the Northland.

This means the best days for holiday travel fall on Tuesday, Thursday and late Sunday night into Monday.