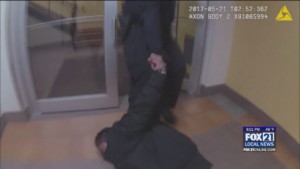 DULUTH, Minn. – A fired Duluth police officer is officially allowed to get his job back after a use-of-force incident.  That’s the world from the Minnesota Supreme Court.

Officer Adam Huot was terminated after a 2017 incident where he’s seen on police body camera video dragging a defiant hand-cuffed man through the Skywalk before the man hit his head on a doorway.

The Supreme Court’s denial to hear the case comes after the Court of Appeals, the District Court and an arbitrator ruled the actions unreasonable — and that a 13-month suspension without pay was appropriate, but not termination.

“On November 27th, the Minnesota Supreme Court issued an order denying the City of Duluth’s petition for review.  The Supreme Court order ends the City’s efforts to overturn the June 22, 2018, arbitration decision ordering the reinstatement of Adam Hout as a Duluth police officer.  The City will now work with the Police Union to bring back Officer Hout to a suitable assignment.  The parties will also need to resolve questions regarding back pay.”

“The Duluth Police Union acknowledged that Huot’s actions were inappropriate for the circumstances.  However, we believed, as did the arbitrator, that Adam Huot is a good cop who made a bad decision which did not justify termination.”  Boese also noted that “Officer Huot is a person of high integrity who took responsibility for his actions and has been very remorseful about the impact his conduct has had on the individual in question, the community, the Department, his fellow officers.”  Boese concluded by saying “Adam Huot has a lot to offer to the Duluth Police Department and the citizens of Duluth.  He is relieved that this matter is finally over and he welcomes the opportunity to return to work to prove to the community, the Department and himself that this incident should not define him as a police officer or as a person.”