Shooter Kills 2, Wounds Others, is Dead at Florida Navy Base 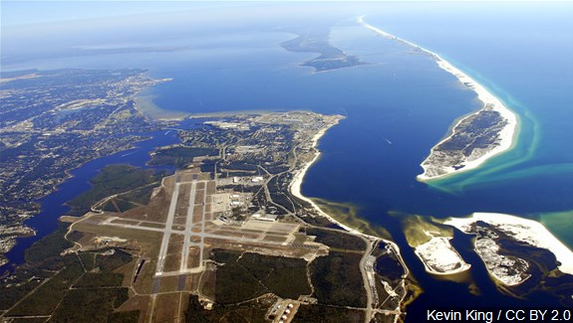 PENSACOLA, Fla. (AP) — A shooter opened fire at the Naval Air Station in Pensacola Friday morning in an attack that left three people dead including the assailant. The gunfire prompted a massive law enforcement response to the base, which was locked down.

The U.S. Navy tweeted that a second victim was dead. Area hospital representatives told The Associated Press earlier that at least 11 people were being taken to hospitals.

Five people were taken to Baptist Health Care in Pensacola, hospital spokeswoman Kathy Bowers said. Six more were expected at Ascension Sacred Heart, spokesman Mike Burke said. Neither spokesperson had information on their conditions that they could share with The Associated Press.

NAS Pensacola employs more than 16,000 military and 7,400 civilian personnel, according to its website. One of the Navy’s most historic and storied bases, it sprawls along the waterfront southwest of downtown Pensacola and dominates the economy of the surrounding area.

Escambia County Commissioner Jeff Bergosh, who works at the Naval Air Station as a civilian contractor, told the Pensacola News Journal he was in line to go through the gate Friday morning when it was shut down due to the active shooter report.

“There’s probably been 100 or so various law enforcement vehicles zooming down the wrong side on Navy Boulevard,” Bergosh told the newspaper. “There’s been ambulances, fire trucks. It’s my understanding there’s multiple causalities.

The shooting is the second at a U.S. naval base this week. A sailor whose submarine was docked at Pearl Harbor, Hawaii, opened fire on three civilian employees Wednesday, killing two before taking his own life.