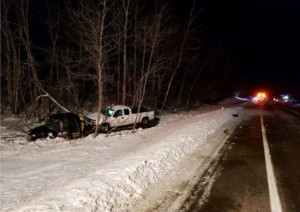 GRAND VIEW, Wis. – A Drummond man was killed in a vehicle crash Friday in Bayfield County.

The crash happened at about 4:40 p.m. on U.S. Highway 63, a mile northeast of South Sweden Road in the Town of Grand View.

The driver of the passenger car, a 39-year-old Drummond man, died at the scene as a result of the collision. A passenger in the tow truck, a 75-year-old Grand View Man, was transported to a nearby hospital for non-life-threatening injuries. The tow truck driver, a 32-year-old Rice Lake, Wisconsin man, was not injured.

Traffic on Highway 63 was rerouted until 10:00 p.m. as the scene was investigated.

Due to family notifications, names will be withheld but are expected to be released later this week.

The incident remains under investigation by the Bayfield County Sheriff’s Office assisted by the Wisconsin State Patrol.