There's no Immediate Word on Their Conditions 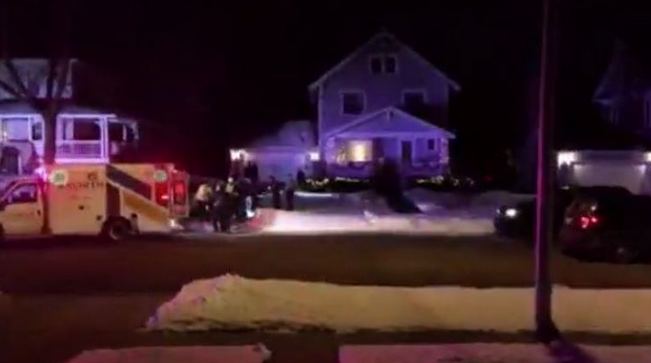 WASECA, Minn. (AP) — A police officer in southern Minnesota was gravely injured when he was shot in the head while responding to a report of a suspicious person, officials said

Officer Arik Matson, 32, was shot at about 8 p.m. Monday in Waseca, and was taken by air to a hospital in Robbinsdale, where he was in critical but stable condition Tuesday, according to Bureau of Criminal Apprehension Superintendent Drew Evans.

The suspect, 37-year-old Tyler Robert Janovsky, was shot twice by other officers at the scene and was flown to the same hospital. Evans said Janovsky’s injuries were not life-threatening. He has

Matson and three other officers were responding to a call of a suspicious person with a flashlight in a residential backyard, Evans said. Officers saw Janovsky on a neighboring property, and “at one point during the encounter with him, Officer Matson was shot. Officers then shot Mr. Janovsky,” he said.

Evans said authorities are still piecing together why Janovsky was in the backyard. He did not live at the house. Janovsky has an active warrant for drug-related charges, but the officers didn’t know who they were dealing with when they were first called to the scene.

WASECA, Minn. (AP) – Officials say a police officer and a suspect have been shot and wounded in southern Minnesota.

The Minnesota Bureau of Criminal Apprehension says the officer was taken by air to a hospital after Monday night’s shooting in Waseca.

The suspect was transported by ambulance to the same hospital.

There’s no immediate word on their conditions.

Hagedorn tweeted that he spoke with Matson’s father, who is a retired officer.

The BCA says the shooting happened after police responded to a report of a disturbance in a residential neighborhood. Waseca is 70 miles south of the Twin Cities.