DULUTH, Minn. – Just hours after the NorShor Theatre posted on its Facebook page Thursday about the April performance by former MPR “A Prairie Home Companion” host Garrison Keillor, the post was pulled down and the show’s ticket information was removed from the NorShor’s website amid backlash on social media.

There was no official word of the show being canceled, as of 4:30 p.m.

“We are aware of the comments, and management is currently discussing this as we speak,” Ashlee Hartwig, marketing director at the NorShor, told FOX 21 Thursday afternoon. 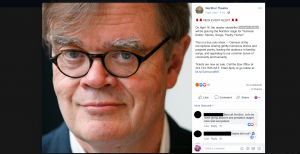 This all comes on the same day Keillor’s upcoming performance at the Woman’s Club in Minneapolis was canceled after mounting controversy regarding his February 29 appearance.

Keillor has been a controversial figure since he was fired in 2017 by Minnesota Public Radio over allegations of what the network called “improper behavior.”

In an email to the Star Tribune in 2017 regarding the allegations, Keillor said the incident involved putting his hand on a woman’s bare back in an attempt to console her.

“I meant to pat her back after she told me about her unhappiness, and her shirt was open and my hand went up it about six inches. She recoiled. I apologized. I sent her an email of apology later and she replied that she had forgiven me and not to think about it,” Keillor told the newspaper.

MPR President Jon McTaggart released a statement of his own in early 2018 saying, “If the full 12-page letter or even a detailed summary of the alleged incidents were to be made public, we believe that would clarify why MPR ended its business relationship with Garrison and correct the misunderstandings and misinformation about the decision.”

Garrison Keillor: Stories, Songs, Poetry, Humor is scheduled at the NorShor for April 16 at 7:00 p.m.

FOX 21 is expecting an update from the NorShor later this evening with the status of the show.