Husky Energy: No Damage Found to Stack at Superior Refinery 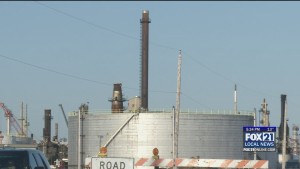 SUPERIOR, Wis. – Husky Energy tells us no damage has been found to the stack seen swaying in the wind at the Superior Refinery.

According to a Husky spokesperson, trained experts entered the site to safely conduct a closer examination of the stack. Drones and computer modeling reportedly provided the necessary engineering information for Husky to make that decision.

The spokesperson tells us all evidence collected so far shows no damage.

Based on the examination, Husky will be setting up a crane to further secure the stack. That is an additional precautionary step to conduct further testing confirming the integrity of the structure.

On Thursday, the refinery was evacuated because of safety concerns related to the stack. It could be seen swaying back and forth from Stinson Avenue. The Superior Police Department told us refinery crews heard a “pop” and noticed a problem with the stack’s structural integrity.

At that time, we were told there was no risk of fire, explosion, or release of any chemical. Nobody was injured in the incident.

Stinson Avenue will remain closed for now. No word on when the road will reopen.