DULUTH, Minn. — With a use-of-force policy now in place for Duluth’s newly purchased protective gear, officers are going through specialized training for those rare events when protesters can turn violent. And while full-blown riots are not a common occurrence in Duluth by any means, Chief Mike Tusken believes it’s his responsibility to be prepared for the worst to keep the community safe.  FOX 21’s Dan Hanger has this special report: Geared Up.

Duluth is no stranger to vocal, yet mostly peaceful protests and demonstrations. But that doesn’t mean the city of 86,000 is immune to potential civil unrest like the riots in Ferguson, Missouri in 2014. 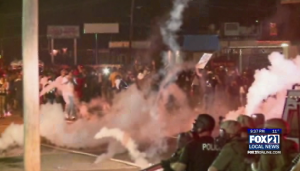 That’s why the Duluth Police Department has partnered with the Minnesota State Patrol to get specialized training annually for crowd control tactics when protesters turn violent against police, citizens and property.

“It is possible that it could happen in our own backyard,” said Sgt. Joel Olejnicak, the department’s use of force coordinator.  “We’re learning tactics on how to be the referee when you have opposing sides.”

One exercise involves batons to use as a barricade — not a striking tool — if an out-of-control crowd is pushing toward police.

The training comes with the purchase of more than 100 sets of protective gear for officers — much like hockey gear — that’ll only be used, per policy, if a riot-type situation were to break out. 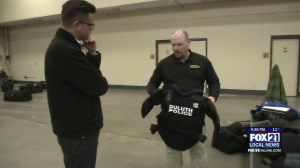 “The vest, this literally is padding that you’d find for a hockey gloves, and it’s flexible so it obviously bends with the officer,” Olejnicak explained.

Olejnicak says it’s all about safely placing officers between opposing conflict to protect people’s constitutional rights to protest.  And the protective gear, or riot gear, is a crucial part of that protection when rocks, cement bricks and the unthinkable are being thrown in their direction.

“The foundation of policing is that we are there to protect people’s constitutional rights, their civil rights, their human rights,” said Mike Tusken, chief of the Duluth Police Department.

Tusken says he’s proud of the year-long community collaboration to create a policy that states when the protective gear can be used, and he says he feels a sense of relief knowing his officers have the equipment necessary if that day were to ever come. 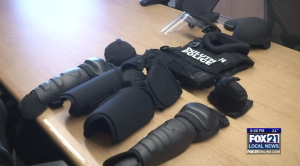 “That’s the responsible thing to do when you’re a public safety leader is to have people who are trained and equipped should that bad day ever happen. And I don’t know what the next threat will be, and yet I have to be prepared for all of them,” Tusken said.

And that preparation is appreciated by the Minnesota State Patrol — an agency that’s not only training Duluth police for the worst, but an agency that will mostly likely be part of the response.

“That’s what both of our agencies pride ourselves on is to work hand and hand as events present themselves,” said Joe Dwyer, a captain with the Minnesota State Patrol. “Making sure that their residents are protected and are getting the best possible services at all times.”

Protective gear is just one of the tools now available for Duluth police to keep the peace — a tool that most likely will never be touched but a need that can be compared to that spare tire in your trunk.

“You probably will never use that spare tire, but in the end of the day, it sure is nice when you are stranded on the side of the road to have that spare tire to get you back on the road and get you moving,” Olejnicak said.