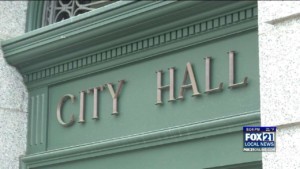 DULUTH, Minn. – Duluth Mayor Emily Larson and city councilors are taking a 10 percent voluntary pay cut through the end of the year.

While the savings won’t be significant to the overall budget shortfall of a projected $38 million on the high end this year, Council President Gary Anderson says it’s an important action to take to support the city and community.

Meanwhile, Councilor Derek Medved told FOX 21 Wednesday that he’s planning to forgo his entire council salary through the end of the year.