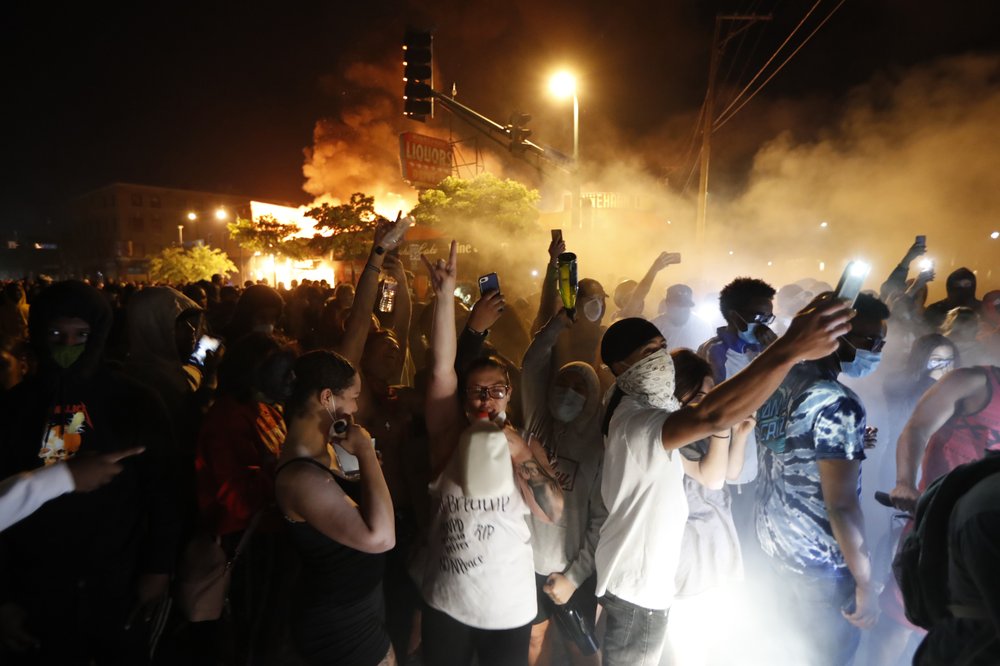 MINNEAPOLIS, Minn. (AP) — Cheering protesters torched a Minneapolis police station that the department was forced to abandon as three days of violent protests spread to nearby St. Paul and angry demonstrations flared across the U.S over the death of George Floyd, a handcuffed black man who pleaded for air as a white police officer kneeled on his neck.

A police spokesperson confirmed late Thursday that staff had evacuated the 3rd Precinct station, the focus of many of the protests, “in the interest of the safety of our personnel” shortly after 10 p.m.

Livestream video showed the protesters entering the building, where fire alarms blared and sprinklers ran as blazes were set.

Protesters could be seen setting fire to a Minneapolis Police Department jacket.

Late Thursday, President Donald Trump blasted the “total lack of leadership” in Minneapolis. “Just spoke to Governor Tim Walz and told him that the Military is with him all the way. Any difficulty and we will assume control but, when the looting starts, the shooting starts,” he said on Twitter.

A visibly tired and frustrated Minneapolis Mayor Jacob Frey made his first public appearance of the night at City Hall near 2 a.m. Friday and took responsibility for evacuating the precinct, saying it had become too dangerous for officers there. As Frey continued, a reporter cut across loudly with a question: “What’s the plan here?”

“With regard to?” Frey responded. Then he added: “There is a lot of pain and anger right now in our city. I understand that … What we have seen over the past several hours and past couple of nights here in terms of looting is unacceptable.”

He defended the city’s lack of engagement with looters — only a handful of arrests across the first two nights of violence — and said, “We are doing absolutely everything that we can to keep the peace.” He said Guard members were being stationed in locations to help stem looting, including banks, grocery stores and pharmacies.

Protests first erupted Tuesday, a day after Floyd’s death in a confrontation with police captured on widely seen citizen video. On the video, Floyd can be seen pleading as Officer Derek Chauvin presses his knee against him. As minutes pass, Floyd slowly stops talking and moving. The 3rd Precinct covers the portion of south Minneapolis where Floyd was arrested.

Minnesota Gov. Tim Walz earlier Thursday activated the National Guard at the Minneapolis mayor’s request, but it wasn’t immediately clear when and where the Guard was being deployed, and none could be seen during protests in Minneapolis or St. Paul. The Guard tweeted minutes after the precinct burned that it had activated more than 500 soldiers across the metro area.

This is a developing story. Check back for updates throughout the morning.

Crazy for Carnitas? Bucktales Cantina and Grill Specializes in the Authentic Mexican Dish