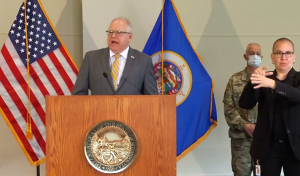 MINNEAPOLIS — The governor of Minnesota says he plans to fully mobilize the state’s National Guard and promised a massive show of force to help quell civil unrest following days of protests over the police killing of George Floyd.

Gov. Tim Walz says he also spoke with Defense Secretary Mark Esper and Chairman of the Joint Chiefs of Staff Gen. Mark A. Milley about getting federal assistance to help stop the violence.

Walz blamed much of the destruction in Minneapolis Friday night on well-organized, out-of-state instigators whose goal was to “destabilize civil society.”

Minnesota Public Safety Commissioner John Harrington vowed a stronger police presence and a change in tactics “because this is intolerable and we are coming to stop it.”