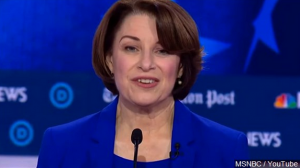 (KMSP-TV) Minnesota Senator Amy Klobuchar says she has told presumptive Democratic nominee Joe Biden to choose a woman of color as his running mate, effectively withdrawing her name from consideration.

Since ending her own bid and endorsing Biden for president, Klobuchar has been viewed as a favorite to join the ticket with Biden, who vowed to choose a female running mate.

However, during an appearance on The Last Word with Lawrence O’Donnell, Klobuchar says now, in the aftermath of George Floyd’s death, she feels it’s important that Biden add a woman of color for his ticket.

So much so, that she said she has recommended it to the former vice president.

“This is a historic moment, and America must seize on this moment,” said Klobuchar. “And I truly believe, as I actually told the vice president last night when I called him, I think this is a moment to put a woman of color on that ticket.”

“If you want to heal this nation right now, my party yes, but our nation, this is sure a hell of a way to do it,” Klobuchar explained.